Tramping in Fiordland in New Zealand

Tramping through Fiordland for a couple of nights with my team from the Otago University Tramping Club (OUTC) was severely moist, soggy, and every other wet word in every language you could imagine.

After a midnight arrival in Fiordland, the entire club spent the first night under a shelter, which I woke up in shortly after falling asleep with a soggy sleeping bag. In the morning I put that to one side and set out for my relatively short tramp to the Hidden Falls Hut, where my team, along with another team, would be staying for a night. 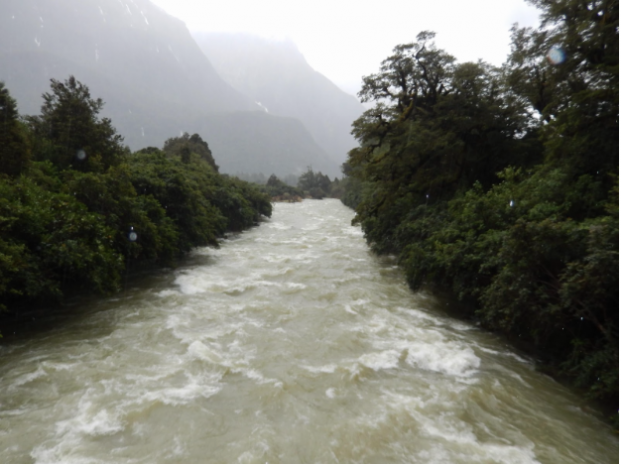 The surprisingly high volumes of rain altered several trips as river-crossing became more dangerous. It downpoured all weekend like nothing I had ever seen before (and that’s saying something, coming from the state of Oregon). This led to the surrounding plant life to sing all weekend and left the countless waterfalls flowing heavily and rapidly. The waterfalls were emerging from every part of the mountain like they were casually sketched into place. The trees scaled up the tallest mountains I’ve ever seen, layering back like columns. I must have seen fifty or more waterfalls in my short three days in the Fiords, but who could keep count.

... what we were really experiencing was Fiordland in its true element.

On our way to the hut we took a few detours, one of which was to catch sight of a waterfall. By the time we had reached the destination the wind had picked up and we couldn’t even face the waterfall due to the water flying at us like bullets. We got a proper shower and continued on our way. We dashed across rivers and crossed some wobbly bridges that would swing side to side as I’d repeat to myself “she will stay on her feet” while trying to balance my 60L pack. Throughout our journey we played a few games including: the hat game, mafia and 21 questions. 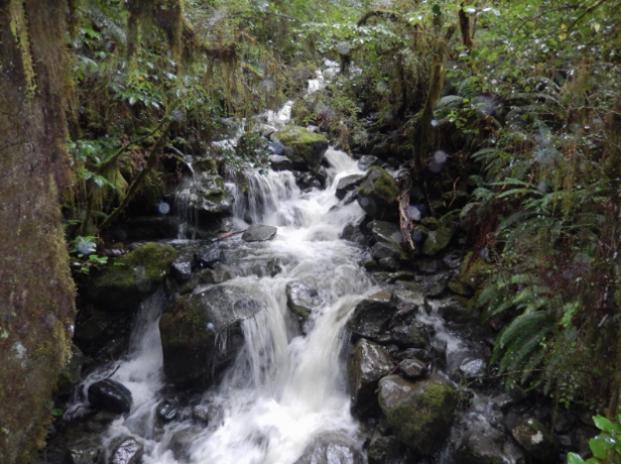 One of which was to catch sight of a waterfall.

Next thing you know we were at the hut and we didn’t wait a moment before changing into dry clothes. Remembering the warmth that came along with it and settling down with some tea, we joked about our luck with the weather. Some Kiwi’s in the teams talked about how the rainy days are classic Fiordland weather, and what we really were experiencing was it in its true element. I liked this thought and felt as though everything was growing and getting greener all around me.

As things started winding down I took some time to myself and picked up the only book around that one of my team leaders had brought along. It was the 2014 edition of Antics, the Otago Tramping Club’s print of tramping adventures. It was incredibly fascinating to read about the wild trips people went on, like a trip a couple of club members took to tramp in Nepal. The tramps set forth by these guys were challenging and more than inspiring.

We spent the rest of the night playing games in large groups in the cabin. We woke up early enough to get back to the divide, eat lunch, and head back home to Dunedin after a lovely, nature filled weekend in the bountiful fiords! If the weekend away assured me of anything, it was that coming to New Zealand to tramp, see the scenery, and spend time with people who value the same things was only going to get better.

The University of Otago is New Zealand’s first university, founded in 1869. Otago’s main campus is in Dunedin (population 121,000) with further campuses for medical and health sciences in Christchurch and Wellington.

A Day in the Life of a PhD Student-Mother

International PhD student Sherrie Lee has come to NZ with her family. She shares how she balances study and family.

Ketaki Khare shares her thoughts on women in rugby and sports in NZ and shows why you should give it a go.