Make a Difference While You Study

Dr. Billy O’Steen teaches community engagement at the University of Canterbury and leads the university’s efforts to make real-world, community-based projects a part of every student’s experience. It’s an idea that was inspired by students in the aftermath of the Christchurch earthquakes.

Originally from the United States, O’Steen had been a Senior Lecturer at the university for five years when the earthquake struck in 2010. The 7.1 magnitude earthquake and the large aftershock that followed 6 months later caused significant destruction across the city.

Organising themselves via Facebook, more than 13,000 University of Canterbury students showed up in the weeks following the earthquakes, volunteering their time to clean up the damage and help those in need in the community. They called themselves the Student Volunteer Army.

Inspired by the positive impact the students were making on the city, and with the support of the university’s vice chancellor, Dr O’Steen launched a new course, ‘Rebuilding Christchurch 101’, just three months after the earthquakes. 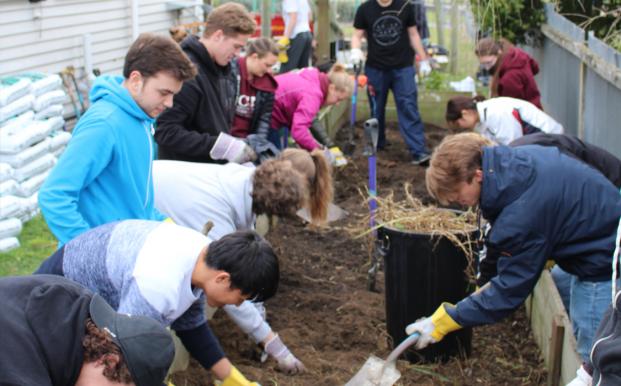 Students in the Rebuilding Christchurch 101 course build a garden at a community kindergarten.

“We had about a hundred students take the first class. They were all Student Volunteer Army students, so they had all been out volunteering, shovelling liquefaction.”

O’Steen’s design was to count that service as a third of the course already completed. The remainder of the course was made up of academic content about volunteering and first disaster response, as well as essays and reflective pieces.

“We didn’t know at that point whether we were going to continue to run the class. We weren’t sure whether it was one-and-done or it was going to be a real thing,” he remembers.

It’s a formula that worked. Now, eight years on, the course is still running and O’Steen’s job as Director of Community Engagement at the university is to help his colleagues incorporate community engagement into their courses so that students can contribute in a relevant way, no matter what they are studying. An economics student, for example, might gather statistics or do a survey or report for a neighbourhood that’s in need of one.

O’Steen says that this style of learning has a double benefit.

“Not only are students having a real-world opportunity to apply what they’re learning in the classroom, but they’re also doing something that’s of value to the community.”

“Students suddenly realise that the project that they’re doing has bigger implications than an essay you might hand just to a teacher who is going to grade it. It’s actually going to be used by this community group to do…whatever. I think it gives them a sense that there’s something bigger that they’re a part of.”

“And then at a very tangible, practical level, they learn valuable real-world, transferable employability skills, like problem-solving, teamwork and communication, and self-direction and project management.”

The Student Volunteer Army still operates as a club at the university, with 3,000 members. Club President and engineering student Josh Blackmore says that Billy O’Steen has been a good friend and mentor.

“Billy’s awareness and unique insight into what drives movements like ours allows students to apply the lessons learned out of the confines of a classroom, to address the challenges they see in their own communities,” says Josh.

“My involvement at the University of Canterbury and with the Student Volunteer Army has shown me just how much we can positively impact a place, community or person when we listen to them and work together to address their needs.”

Learning About Ourselves While Studying Abroad

Students share what they’ve learned about themselves while studying in New Zealand.

What New Zealand Has Taught Me About Community

Coming from a small town back home, Leah was pleased to find a sense of community in Christchurch city.