Getting Around New Zealand by Bus

I am writing this to highlight New Zealand’s wonderful bus system that helped me to travel all across the South Island without ever buying or renting a car.

To show how well it works I thought I’d share a trip I took one weekend around the middle of my semester.

The first leg of the trip was a bus ride on Friday afternoon from Dunedin to Queenstown, the famous resort town. I walked and explored this cool town which offers countless shops and restaurants for visiting tourists. Many students choose to spend several days relaxing in the town staying at a hostel however, I was only there for the evening.

The next morning I woke up early to catch a shuttle bus to the shelter at the start of the Routeburn Track. Here I was able to hit the trail around 10am and spend the rest of the day hiking.

The Routeburn Track was absolutely beautiful and I cherished every moment of it. I am an experienced hiker so I hiked most of the track in one day. I stayed at a hut roughly four miles (6km) off the track as it was free, although it made for a long day of around 25 miles (40km)! 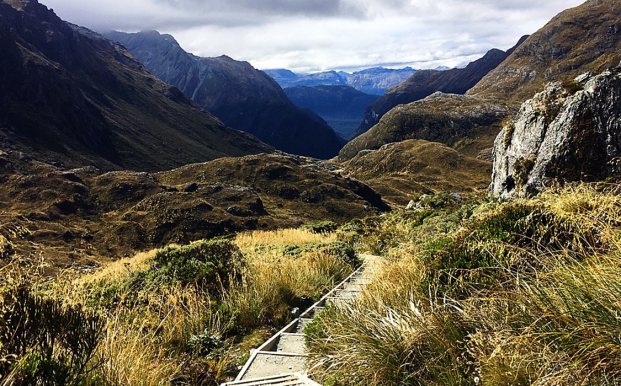 Some of the beautiful scenery on the Routeburn Track

Leg 3: Routeburn to Milford Sound and back to Dunedin (via Queenstown)

The next day I woke up early and hiked out to the end of the track where I met a shuttle bus at 11am to take me to Milford Sound.

When I arrived at Milford Sound I took an afternoon cruise – it was absolutely gorgeous and really relaxing after my hard day’s hike. After the cruise, I boarded a bus back to Queenstown and then on to Dunedin. All in all, the bus transport was incredibly convenient and I never found myself spending more than 15 minutes waiting for a bus.

The trip was not only affordable but allowed me to hit three South Island highlights in one weekend which was really cool.

Jacob Rob is a rising junior at Princeton University where he is studying International Relations and Environmental Studies. Jacob has always had a deep passion for travel and the outdoors and studied abroad at the University of Otago during the sophomore spring semester. He not only enjoyed the wonderful outdoor opportunities but “what I found myself falling in love with most was the people and culture.”

Tips for the Weekend Traveller

Here are 5 travel tips for students wishing to get the most out of their weekends on a budget.

Jacob Rob is a rising junior at Princeton University where he is studying International Relations and Environmental Studies. Jacob has always had a deep passion for travel and the outdoors and studied abroad at the University of Otago during the sophomore spring semester. He not only enjoyed the wonderful outdoor opportunities but “what I found myself falling in love with most was the people and culture.”

Wave Energy: Capturing the Motion of the Ocean

PhD student Dani Bertram chose New Zealand to carry out her research into wave energy – one of the world’s most promising sources of renewable energy.

Tūrangawaewae – A Place to Stand

Studying Māori culture can teach you how important the places we come from are in shaping our identity.