The lake glistens, the birds sing, the trees dance in the wind, and a beautiful melody rings through the air:

Arm in arm, the whānau sing.

It is a sunny Sunday morning in Vermont, USA, and the North American Whānau Council – East Coast has gathered.

The whānau (family) gathering is made up of students and alumni who have spent a semester studying abroad in New Zealand at Auckland University of Technology (AUT), where they attended the Noho Marae weekend, immersing themselves in Māori culture.

University of Vermont students Jessica Cohen and Kathryn Maitland took it upon themselves to establish the first North American Whānau Council, following in the footsteps of their European counterparts. The Council is a place for alumni to share, reconnect, and remember. 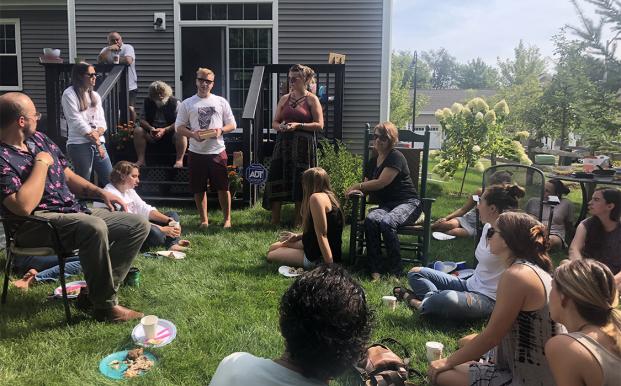 Lunch at the North American Whānau Council 2018 meet in Vermont.

Looking at the alumni who make up the group it is clear to see the lasting effect AUT’s International Student Noho Marae Programme has had on them. The students wear traditional pounamu proudly around their necks as they liberally exchange memories of their time in New Zealand, and leap at the chance to sing a waiata. For these students, the Noho Marae weekend has led to an everlasting connection between themselves and New Zealand.

“The biggest thing I learned from our work with the Māori culture was this feeling of connectedness, and that whānau or family means so much more than just bloodlines," says Jessica.

"The power that comes from opening your hearts and your homes, your marae, to all of these strangers who have now become family is really powerful."

“We just thought the Noho Marae was such an amazing experience, how can we replicate it and connect with these people year after year after year? The idea that you can feel home depending on who’s around you inspired my friend Kathryn and I to start up the North American Whānau Council.”

According to Jason King, Senior Lecturer, Faculty of Māori and Indigenous Development at AUT, the strong connections these students form is no accident.

“We want to showcase the uniqueness that Aotearoa has. One of those unique things about Aotearoa is obviously our culture, the Māori culture.”

By embracing Māori culture and in turn being embraced themselves, these students have returned to their home countries with broader views of the world and their place in it.

“In New Zealand the Māori have their own unique culture, but there’s a lot of ways that they are woven into everyday New Zealand culture,” says Jessica. “For people that come from countries where the relationship isn’t like that, to recognise the importance of all Native people, it’s definitely made me more aware of our own situation here.”

The chance to reconnect with local indigenous people was demonstrated at this year’s East Coast AGM when the Chief of the Nulhegan Abenaki tribe, Don Stevens, attended the dinner to show support for AUT’s developing connections in the region. Chief Don Stevens took the floor and captivated the room with stories of the Abenaki people’s origin and cultural traditions.

“When Chief Don Stevens came the other night, it just cemented what we’ve been advocating all this time. That is merely a beginning, because it sparked conversation after he left. And now people are thinking about Abenaki here in Vermont,” says Jason.

The North American Whānau Council – East Coast is one of three whānau councils set up by students worldwide, the other two being in Europe and the USA’s West Coast. The Whānau Councils are supported formally by AUT, and Jason and his wife Andrea make an annual trip to visit each of the groups worldwide.

By studying abroad in New Zealand, students up and down North America’s East Coast have had not just a study abroad experience, but a life changing one. They have gained international experience and opended themselves up to cultures abroad and at home. More than that, they have found a new whānau.

Lewis is a Kiwi based at the Embassy of New Zealand in Washington DC, USA. If you live in the US, you might meet Lewis at your school’s study abroad fair, where he’ll be proudly representing New Zealand. Feel free to come and say kia ora!

Discover the many advantages of studying in New Zealand New Zealand, quality education The OECD Better Life Index rates New Zealand as a ‘top performing country’ for the quality of its education system Innovation and optimism shapes our education system, producing creative and successful graduates.

Get Ready to Study Abroad!

What to Expect From a Noho Marae Experience

When you study in New Zealand you might get to experience a "noho marae".

Lewis is a Kiwi based at the Embassy of New Zealand in Washington DC, USA. If you live in the US, you might meet Lewis at your school’s study abroad fair, where he’ll be proudly representing New Zealand. Feel free to come and say kia ora!

My Journey to Becoming a Travel Journalist

It would be a lie if I said it wasn’t hard. It was. But the school also gave me a safety net. I knew there would be someone there to catch me.

The Theory of YES

Have you ever been in a situation where you want something badly but are afraid to ask for it?