Game developer student Claire Barilla recently attended the Game Developers Conference 2016 (GDC) in San Francisco. We shared some of her thoughts before she went and promised that we’d share some on her return. As promised here are some thoughts, reflections and advice from her first time at the conference.

A mini compilation of the Kiwis at GDC 201

The first day was really exciting – I was overwhelmed by the scale of the conference and the sheer amount of talks that were happening. The Moscone Conference center is absolutely huge and every room is filled with an interesting talk, it is impossible to decide between all of them. Fortunately, with a conference pass you also get access to the GDC vault, which lets you catch up on the talks you may have missed.

Go To a Talk Outside Your Field of Expertise

A few talks I went to were a little out of my comfort zone, particularly the few AI talks I opted to attend. I would recommend anyone going to GDC tries going to a talk they normally wouldn’t, something that is not their primary job or interest. It was wonderful to gain a deeper understanding of AI functions; even though I only do a little programming, it was still highly educational and I would argue that it has improved my ability to understand and communicate with the programmers in our team. The Virtual Reality (VR) talks I attended made me more passionate about testing out VR in our next game and considering things that could offer players completely new experiences outside of the game. I felt as though I could take something new away from every talk at GDC, especially those that were outside my area of experience. It is always worthwhile trying something new.

I only attended a few diversity talks at GDC and every one of them was a highlight. These talks challenge perspective, they make us think more deeply about games and consider things about developers we may not have considered before. Try it - diversity in games starts with diverse developers; challenge yourself to think about these things. It is so encouraging to see such a push for diversity and incredible support from the industry as a whole. Some highlights included: 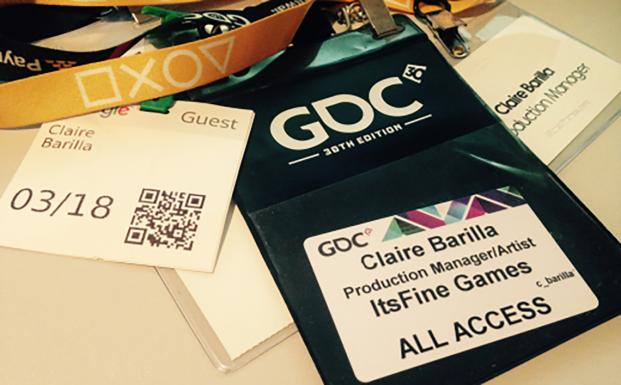 Dedicate Time For the Expo

With all of the talks at hand, it can be easy to forget or dismiss one of the most wonderful parts of GDC – the Expo. Initially, I dedicated about an hour or so for the Expo before heading to one of my talks - leading to me completely losing track of time and wandering around the Expo for 4 hours. There is just so much to see; the Google booth was a great place to relax, the Epic booth had a VR party going and Allegorithmic had a load of cool Substance painter/designer displays. I ended up getting lost in the PlayStation and Xbox booths, playing a variety of unreleased games. You could literally spend the full week in the Expo and Careers Centre and not get bored.

If there is one thing that I can take away from GDC, it is just how amazing game developers are - we really are a cool bunch, being so ready and willing to communicate, share and just generally be friendly to one another.

An encounter that stuck with me after GDC was randomly bumping into one of the developers from Keep Talking and Nobody Explodes. We ended up just having lunch together and I got to hear that the idea for the game originally came from one of my favourite TV shows.

Something like GDC reminds us just how connected the games industry is, with conversations just in passing that make me so excited about game development as a career. We have an industry filled with exceptionally talented, kind and inspirational individuals.

Claire Barilla is a current student at the Media Design School in Auckland, New Zealand. Claire is studying a Bachelor of Creative Technologies (Game Art).

Claire Barilla is a current student at the Media Design School in Auckland, New Zealand. Claire is studying a Bachelor of Creative Technologies (Game Art).