5 Things I Wish I'd Brought to NZ With Me

I moved over to New Zealand from the United States in the first week of July and was shocked by the beautiful views throughout the country! The friendly atmosphere made me feel at home, however there were 5 things I wish I brought to NZ with me.

1. New Zealand cash
This one should be obvious; however I didn’t think it was that big of a deal. I was very wrong. I came to New Zealand with $15 American money, a debit card, and a credit card. I had contacted my bank saying I would be traveling to New Zealand for the rest of the year, so I didn’t think get cash exchanged would be necessary. But, when I arrived, both of my cards were declined after my first purchase. The bank must have got an automated alert of suspicious activity and froze my cards for a couple days before getting sorted out. Luckily the strangers living around me, who are now some of my best friends, helped cover me until they began working again. But all in all, I would highly recommend bringing cash.

2. A puffer jacket
Now arriving in New Zealand in July, I knew it was going to be winter, however many people downplayed the cold. I’m from North Carolina so I definitely receive both ends of the weather spectrum and I was told New Zealand’s winter was a “chilly fall day” back home. Of course I brought a sweatshirt and light rain jacket, but I was severely caught off guard upon arrival. The thing about the cold in NZ is that it’s not just cold outside, it’s cold inside as well. In my case no one I lived with, or surrounding houses, turned on the heater because the monthly bill would skyrocket. The morning after my arrival I went to the nearest store and bought 3 more jackets (one being a puffer jacket) and have been great ever since!

3. Hometown snacks
Of course I knew I would miss my small town takeaway shops, but I didn’t realize how much I would miss Goldfish, or even ramen. New Zealand has so many food options throughout every store, but there’s always that one snack the United States has that NZ doesn’t. If you can fit something in your luggage for an emergency homesick snack, I would definitely recommend. Just make sure NZ doesn’t have it before you pack it in! 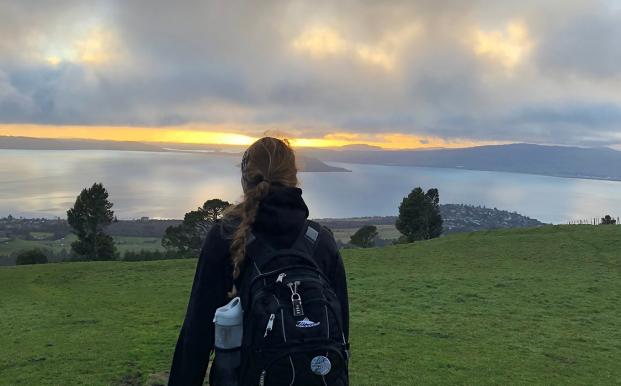 Beautiful views and a well-equipped backpack

4. Travel towel
Honestly I didn’t know this was a thing, but once I found out there’s thin portable towels, I wish I had one. If you’re studying in New Zealand I’m assuming you’re going to want to travel. A lot. While some hostels offer towels, many don’t or may charge a fee, and if you’re hopping around to different places the fees can add up. Personally I bought a cheap beach towel for my backpacking trips throughout the semester, and even though I only payed $10 for it, it’s not worth the hassle. Travel towels roll up and can fit so easily in any bag. So, if you plan on doing any traveling while abroad, I recommend packing smart and ordering a quality travel towel!

5. Portable charger and speaker
Now you would think this one is mostly self-explanatory, but I forgot both of these. While New Zealand has countless views of mountains, lakes, beaches, it’s easy for your cellphone to die while taking pictures. And if you're someone who uses their phone as their camera, like me, it’s devastating when your phone does halfway through a beautiful hike. Another note to go with is, is a portable speaker! Now this is definitely not a necessity, but I can’t keep track of how many times I’ve sat on a beach, or laid in the sun, or just had a game night with some friends and no one could play music because we didn’t have a speaker. Sometimes playing your favorite songs in front of a beautiful view can really make some amazing memories!

Sophie is a University of North Carolina psychology student studying for a semester at the University of Waikato in Hamilton, New Zealand.

Tips for Pre-Departure for Study Abroad in New Zealand

Congratulations – you’ve been accepted to study in New Zealand! Here’s what you need to do before you leave.

Are you a student preparing to travel to New Zealand?

Sophie is a University of North Carolina psychology student studying for a semester at the University of Waikato in Hamilton, New Zealand.

How New Zealand Educates the Teachers of the Future

New Zealand’s world-ranked education system gives student teachers the skills they need to prepare students for the demands of a fast-changing world.

Should You Use an Education Agent?

An education agency can help you learn about your options and give advice to help you choose where to study, and to submit your applications.