A Different Life in 18 Months

For Ana Maria, the prospect of going on a high school exchange was as terrifying as it was exciting.

Studying at Rangitoto College in New Zealand changed me in so many ways. Because of this experience, I became the person that I am today.

I was born and raised in Colombia. Ever since I can remember, I have always had a maid in my house. Her job was to clean the house, cook for everyone and look after my brother and I. I was a spoiled kid, I never had to do something for myself. I went to the same school since I was young, and throughout my life I had practically the same group of friends. But suddenly everything was about to change.

During my second year of high school, I decided I wanted to do an exchange programme. My parents were not really happy about the idea, I was only 15 years old, and their little girl wanted to leave home. I found the agencies that offered the programme I was looking for and scheduled appointments for my mum and I to have an information talk. At the beginning I was looking to go to South Africa, but none of the agencies offered the programme there. They gave me the option to go to Canada or New Zealand. I did my research on both countries and New Zealand definitely rang more bells in my head.

I had everything I needed, I just had to go through with it.

The days leading up to leaving were both exciting and dreadful, I felt scared to be leaving my family and friends, but I was ready to take on that new adventure. Soon I was all packed and boarding a plane that would take me very far away. When I got to New Zealand, after clearing customs my host-mum was waiting for me, and with a big hug, she welcomed me into her world. Until then I believed my English was good enough, but trying to understand everything she was saying was really hard, not only because English is not my first language but also because she had a different accent from the one I was used to at home.

The little bubble of the fairy-tale I knew and lived in was burst. Everything was so new and different. The first few weeks of school were quite hard. Making friends at school was the hardest of all, because of the language barriers and also because I was very shy and it was difficult for me to get close to people. Initially I used other international students from Colombia as my comfort zone. The Colombians had the same customs as me, spoke the same language and, like me, were scared of this new step in their life. We stuck together relying on each other for everything.

But soon it was time for most of my new close friends to go home. I was feeling sad and lost and wondered if I made the right decision, when I chose to stay longer. I knew I had changed through it all, as I was now more open, responsible and organised. But I also realised I was not making the best out of it. My parents were not paying all that money to send me to the other side of the world for me to have Colombian friends.

As the new school year began I promised myself I would enjoy the time I had left in the best possible way. Soon I was hanging out with people, not only from New Zealand, but from all over the world. My English got better with time, and I could feel the relationship with my host-family growing fonder and stronger. All this gave me the opportunity to have a real Kiwi experience, which made me love New Zealand and everything it had to offer. Eight months into my exchange I begged my parents to extend my stay, making it a total of one-and-a-half years.

My exchange was not 18 months in my life, it was a fully different new life in 18 months.

It gave me the chance to realize we are all the same no matter where we come from. I grew as a person and learned how to be independent. The time I spent in New Zealand was nothing like I expected it to be, but it was everything I wanted it to be. I enjoyed every moment and experienced everything like a local. So when the time came for me to go back, I felt heart-broken.

Leaving New Zealand is the hardest thing I have done in my life. I felt lost, I felt that a part of me was staying behind. When I got to Colombia, I felt like a stranger in my own home, I felt that I did not belong there anymore. I felt I had changed, while everyone else was still the same. My friends and family could not understand what I was going through, no-one really knew how it was like to feel homesick in your own country. 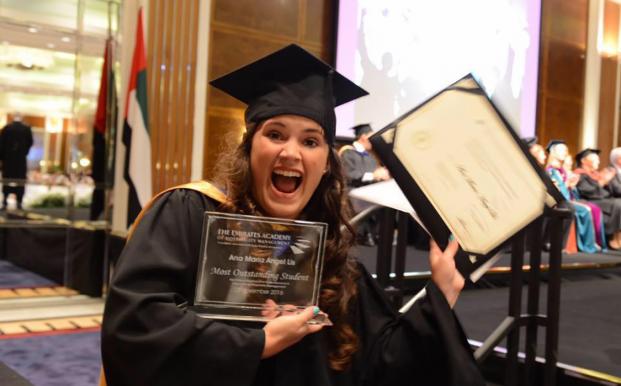 Ana Maria graduates in Dubai, after being inspired by her high school exchange experience in New Zealand.

Going to New Zealand changed me. I fell in love, not with a person, but with a whole country, the culture, the people and their passion for rugby. I became someone else’s daughter and sister, and created friendships that will last a lifetime. I had a taste of what it was like to live outside Colombia, and as much as I love my country, I understood that there were many opportunities elsewhere. New Zealand planted a seed of wanting more for myself, a little plant that I have watered with desire and that has led me to where I am today.

During her high school years, Ana Maria spent 18 months on exchange at Rangitoto College in Auckland, New Zealand. She says that studying in New Zealand “planted a seed of wanting more myself” and made her more ambitious. She now works in Revenue Management at Atlantis, The Palm in Dubai.

During her high school years, Ana Maria spent 18 months on exchange at Rangitoto College in Auckland, New Zealand. She says that studying in New Zealand “planted a seed of wanting more myself” and made her more ambitious. She now works in Revenue Management at Atlantis, The Palm in Dubai.

A particular type of master’s programme, described as a taught master’s, is becoming increasing popular in New Zealand.

New Zealand Professor Gives Lessons in Success from the All Blacks

Professor Andy Martin doesn’t just pass on knowledge to his students – he develops “confident people who can thrive anywhere”.